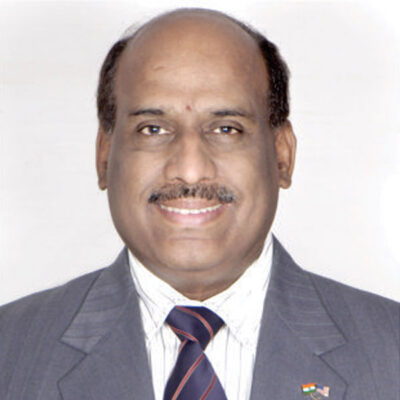 Mr. K. Shiva Shanmugam, a Graduate in Commerce and Diplomate in Business Administration. He  hails from a business family and is a successful industrialist with varied interests. Their family business, M/s. Sivasakthi Engineering Company and M/s. R. Kuppuswamy have created a niche for themselves in the industrial world for best business practices over several decades.

Mr. K. Shiva Shanmugam, Imm. Past President of FKCCI has introduced innovate programs during the year 2012-13 like Solid Waste Management in association with BBMP etc. He, as a Member of the Managing Committee of FKCCI during the last 12 years served as Chairman of Tourism Sub-Committee for 6 years with utmost devotion.  The South India Tourism Directory conceived by him is a regular feature for FKCCI year after year. He is presently elected as National Executive Committee Member of FICCI, New Delhi and also Executive member of International Chamber of Commerce, New Delhi. He had the distinction of organizing an International Business Conference along with H.H. Sri Sri. Ravishankar Gurudev, Art of Living inviting several leaders across the Globe in the month of February 2013.

Mr. Shiva Shanmugam has the rare distinction of being nominated as one of the two Indian Partners in The Asia Foundation. He was also nominated as a member of Board of Governors of UVCE (Bangalore University) during the year 2012-13.  He is the member of All India Steel Drums and Barrels Manufacturers Association, Mumbai.

Mr. Shiva Shanmugam a member of Advisory Committees on Tourism, a Resource Person, a Thinker and Educator par excellence. He earned applauds for his brilliant presentation at 2010 and 2012 editions of Global Investors Meet, GoK.   He has the distinction of having addressed 25 colleges in this year, with an audience of more than 25,000 students, to name the few BMS College of Engineering, University of Visvesvaraya College of Engineering, Mount Carmel College, Manipal University etc.

Mr. Shiva Shanmugam earned a lot of admiration from none other than H.E. Governor of Karnataka and former Hon’ble Chief Minister of Karnataka Sri. Jagadish Shettar, as also the present Hon’ble Chief Minister of Karnataka Sri. Siddaramaiah for conducting good programmes for the growth of trade and industry both National and International as a President of FKCCI during the year 2012-13. He conducted Kodagu Business Development Summit during his tenure successfully, for which EoI’s were signed to the extent of Rs.2500 crores during December 2012.

Mr. Shiva Shanmugam also served as a Chairman of the ASEAN Chambers of Commerce Business Meet 2019 during 25-27, February 2019.  150 Delegates from 20 countries had participated in the event.