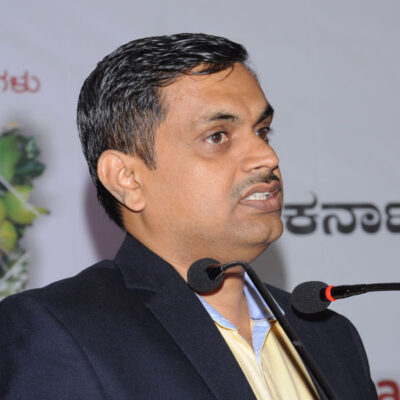 Equipped with a specialisation in Mechanical Engineering from the Mysore University, Shri Satheesha’s career trajectory spans over two and a half decades. He has served across various key positions and functions in his  extensive experience in the Department of Industries & Commerce, Govt. of Karnataka.

He presently spearheads Visvesvaraya Trade Promotion Centre (VTPC) as Managing Director since June 2018. VTPC is the designated Nodal Agency for the promotion of international trade from Karnataka. The Centre assists and facilitates stakeholders, budding exporters, SEZs, EOUs, addresses their grievances/issues in trade through a vast array of services and ongoing export oriented programs.

With VTPC having been recognised as the Nodal Agency for the promotion of Geographical Indication Tagged products as well from the State of Karnataka, Shri Satheesha is also the Nodal Officer for the promotion of GIs from the State. Through the State Geographical Indications Policy which is on the anvil, he provides impetus to his area of passion, namely the socio economic grass roots of the State. He has also been closely involved in the formulation of the Logistics Policy for Karnataka, State Export Strategy, among others.

Shri Satheesha also provides fillip to the Government’s ambitious ‘Compete with China Program’, as the implementation agency on behalf of the Government initiative. His specialities span Policy, Strategy, besides implementation of various schemes across districts as enshrined in the New Industrial Policy for Karnataka.

In his career span in retrospect, Shri Satheesha embarked on his professional journey in the year 1994, having served as Joint Director, District Industries Centre, Bengaluru Rural for promotion of Industries at District level. He leveraged his IT acumen as  General Manager (IT), Karnataka State Beverages Corporation, a sole liquor distribution entity of Karnataka. As Joint Director, Karnataka Udyog Mitra, he was actively involved in facilitation and promotion of Industries in the State. Widely travelled, he was part of the State’s high level official delegation to more than 10 countries.